How to Promote Dating App to Drive App Growth? Over the past decade, online dating has turned stigma on its head and become one of the most prolific mobile app categories. Global App Trends report found that dating is one of the fastest-growing app verticals (behind games and ride-hailing apps), while other reports indicate that the global dating app market is expected to exceed $8.4 billion by 2024.

Despite this demand, over 90% of online dating startups fail. Your dating app marketing strategy must be tight, ensuring that you show users why your dating app is unique, fun, and applicable to their individual needs.

Users will not waste time on a dating app without an active user, so it is critical that your audience is immediately exposed to user-generated content when they open your app. This is a dilemma for developers looking to launch new apps that have yet to build a loyal, active community, but there are a number of ways you can optimize the momentum of your app before you launch.

Apps like Tinder, Bumble and Grindr dominate the mass market, but there are plenty of opportunities to find your niche and build a loyal community. Defining your target audience is a critical step in ensuring your community is institutionally built and an effective way to increase your value to users. Competing with corporate giants is largely pointless, which is why it's best to find a niche by segmenting your audience. It also applies to social media. There are a growing number of community apps aimed at young moms (Pumpspotting, Peanut), freelance travelers (Homeis), and millennials (Friended).

Muzmatch - is an app that helps Muslims find a mate. The growth of the user base is truly impressive - 200,000 users in 2017, but now there are 4 million users from 190 countries. In your profile, you should write down how many years you want to be married, your religion and how often you pray.

Feeld -is an app for polyamorous couples. Users can choose from more than 20 genders and gender identities to find someone who fits the bill. Photos can be shared within the app.

HER - is an app made for queer women that focuses on creating a safe space. The app even has volunteer moderators who monitor compliance with community rules.

Grindr - is an LGBTQ dating app that was launched in 2009. The app now has millions of users. Its mission is to create a supportive environment where diversity and mutual respect can flourish.

Pure - is an app for people who are looking for link-ups rather than serious relationships. You have 24 hours to schedule a meeting. If you need more time or want to chat longer, you can turn off the chat timer. All photos self-destruct after being seen, and if someone intercepts the screen, you will receive a notification about it.

Plenty of Fish - is an app aimed primarily at young people just out of college. It is part of the Match Group, which also owns Tinder, Match.com, Hinge, OKCupid, Twoo, Meetic, and OurTime.

MeetMe - is a dating service for people aged 40 or older. The app does not position itself as a key feature, but data shows that the app's primary audience is users between the ages of 46 and 55, with the second largest group being between 55 and 65.

Luxy - is a dating app for millionaires, with 60% of its users verified as earning more than 200,000 euros a year. As the app's creators say, its purpose is not to find relationships for "sugar daddies," but to bring together like-minded, wealthy people.

Muddy Matches - is a rural dating service for rural singles.

Finding a partner has never been easy, and COVID restrictions have changed not only the form of communication, but also the form of dating. For example, Bumble introduced forms on vaccinations and acceptable places to meet so that users could immediately assess the risks of interacting with unvaccinated people in public places.

The Anti-Tinder dating app is now very popular. It's about using new tactics and rejecting the standard "swipe card". For a long time, dating services have focused on swiping mechanisms and quick matches, but this approach has given rise to many assumptions among psychologists and sociologists that this takes away the value of matching. You can always swipe further and connect with more people at the same time. In this regard, dating apps are exploring mechanisms for slow dating and data analysis that give users more time to get to know each other and find common interests if they are not specified in their profiles.

On the other hand, society is tired of restrictions, so more and more users are noticing that they don't know what they really want from dating. Dating apps are trying to solve this problem with quizzes and contextual marketing, such as asking for scary movies on Halloween Eve.

Coffee Meets Bagel uses an intelligent algorithm instead of a sliding method. Based on the information you provide, a small number of matches are offered to you each day. Thoughtful communication with a small number of people is slow dating. crown works in a similar way. Each day, users are given 16 candidates. The user compares them with each other and keeps four of them at the end, and he can continue to correspond with them. There is another app, S'More, which focuses on communication itself rather than appearance. The app offers blurred profile pictures that can only be gradually blurred. You literally get to know each other little by little. The mystery remains, forcing you to use the app daily and watch the photos go blurry. Video chat is also blurry.

Most dating apps have a video format. Apps that didn't have it before are starting to embrace it in response to the pandemic and the lock-in to make up for the possibility of face-to-face meetings (e.g., Coffee Meets Bagel). But at the same time, video chat may look different. For example, the video chat in Blindlee is also blurry. You can control the blur of the camera and the blur of the matching camera. One interesting feature is a specific discussion topic, which is suggested by the app on the first call. For example, would you prefer to celebrate New Year's at the beach or somewhere with snow?

An example of an asymmetrical dating app is Bumble. in this app only women can take the first step. The app is also moving towards networking and making professional connections (both women and men can write here first). When filling out your profile, you need to set goals. For example, the app form has a field for "professional growth".

ASO is especially important for the promotion of dating apps because of the high competition in stores. Every opportunity should be taken advantage of, so choose your keywords carefully, experiment with graphics, and don't ignore seasonal ASO.

In addition, the right ASO will bring you organic installs and downloads and provide users with a memorable experience.

Here are some areas to target when applying ASO for a dating app.

How to promote dating apps in the store? Find relevant keywords for search optimization and use them as much as possible. It's worth noting that you need to choose the keywords to optimize accordingly to your niche, otherwise the conversion rate doesn't get a significant boost.

Take a look at how Tinder rank at different keywords 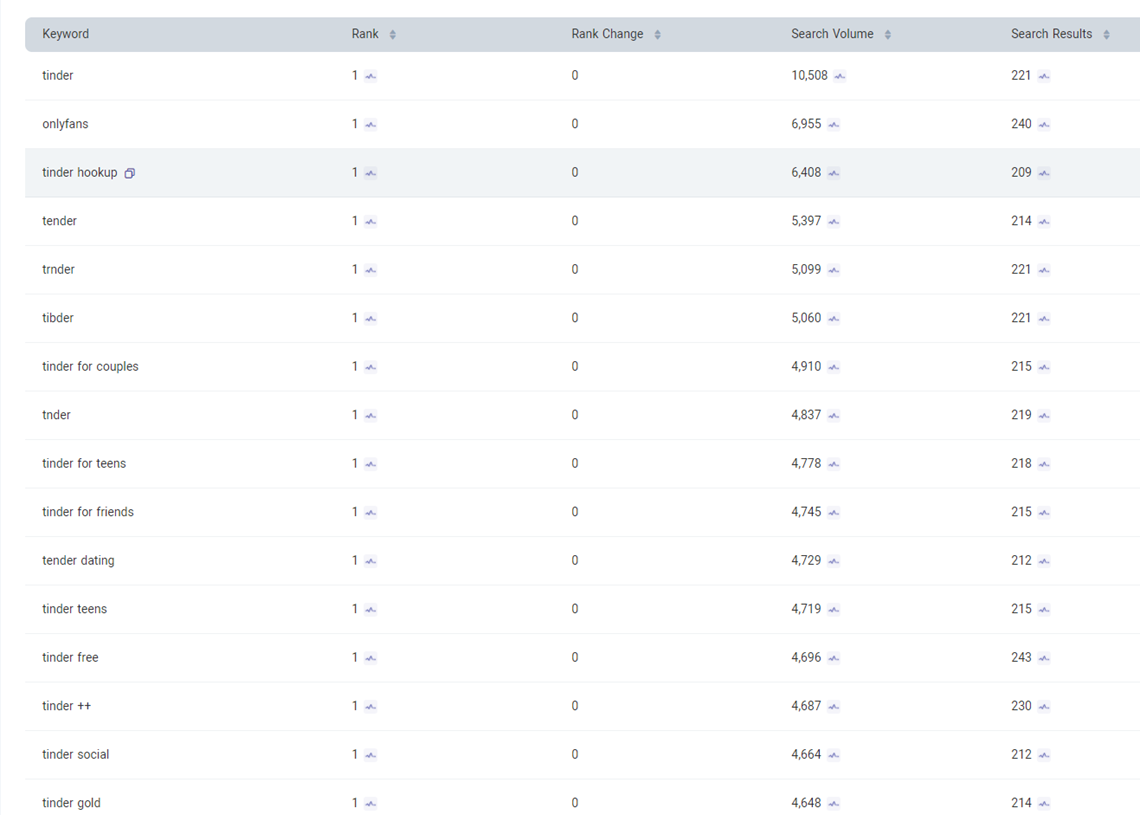 Tinder rank high of its brand name and misspelling names. It also bids for its competitors' brand names such as Bumble, Grindr, Chispa, which makes its potential audience have a chance to see it shown in the app store search results. 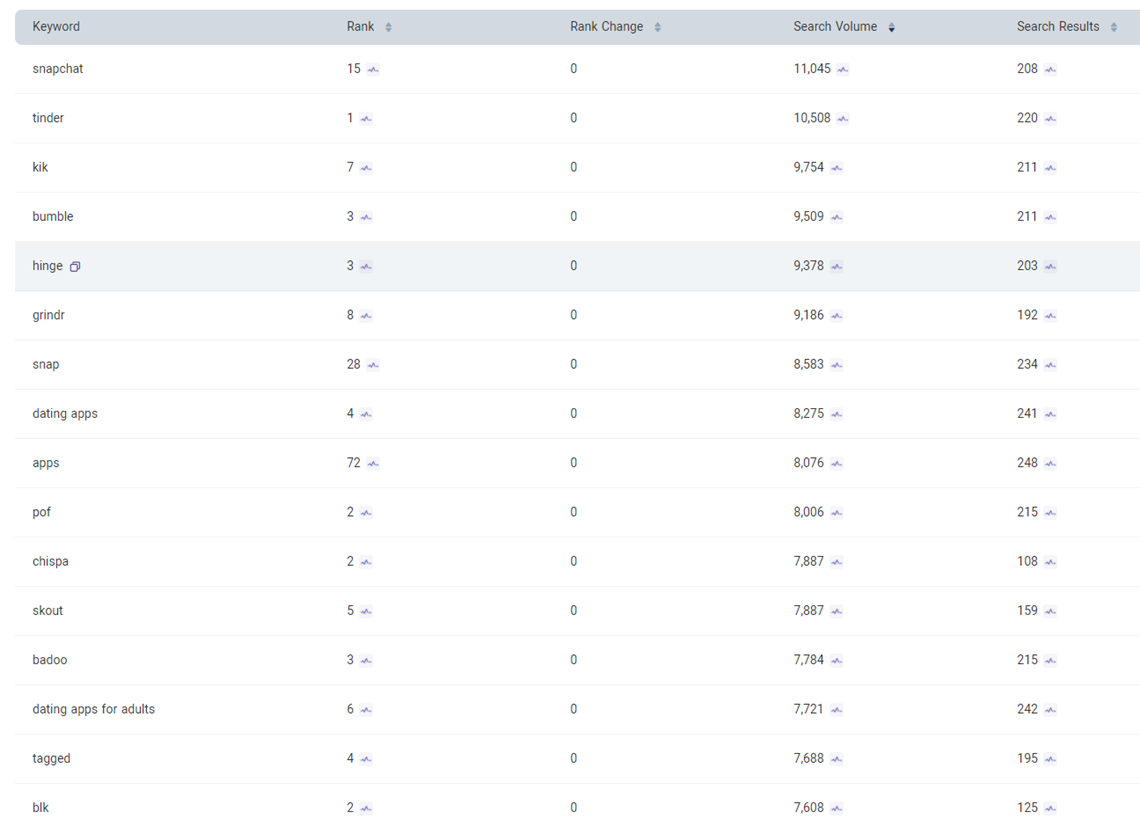 To learn more about keyword analysis, you can check "How to Conduct Competitive ASO Keyword Optimization Analysis" of our previous articles.

Try to include relevant screenshots and other meaningful images to attract more organic users.

According to our research, most dating app libraries include one of two design styles.

Localizing and culturalizing your app can greatly increase its global visibility and boost CVR.

In addition to translating your app into different languages, it's important to research and identify the most popular dating apps for each country/region you're trying to target. This gives you insight into which concepts appeal to locals in a particular region, and how competitors are using their app store assets to attract users.

You must encourage or ask your satisfied users to provide feedback about your app. Likewise, ask them to write reviews in the app store, as this will give other users a reason to install and use your app. For example, you can prompt your users to rate your dating app to ensure that your active users are promoting your app.

For the most part, dating apps make money by offering additional features.