Social App Promotion Strategy: How To Use ASO To Promote The Growth Of A Social App Data driven by recent events under some special international current affairs draws our attention to language apps and social apps across app store categories. The applications have been integrated into different groups in many cases, and their value has been paid more attention by the app markets with the expansion of the circle of people and the rapid growth of user bases. Effective ASO strategies that help apps to grow rapidly at the specific timeline are also expected by marketers of the application.

We will focus on the growth of social apps here. In addition to the well-known leading applications such as FB, Instagram and TikTok, how can other new or med-level social applications rapidly grow up with ASO, in order to play a role in some timeline and to quickly occupy a certain market share.

Signal and Telegram app installs jump 197% in Ukraine between February and March, saw 1.7 million installs. The apps were also picked up more heavily by Russian users with installs climbing 33% to 3.2 million. Similarly, active daily users jumped for both apps, growing 184% for Signal in Ukraine and 81% in Russia. 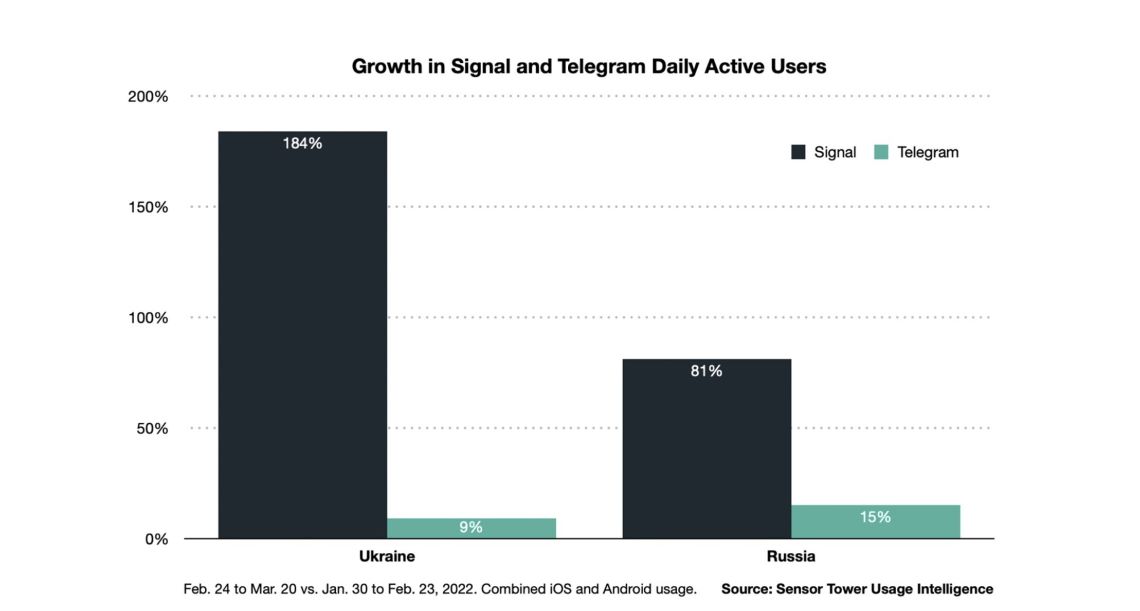 Social apps have quietly taken over our smartphones and made some lucky app owners very rich. This is not surprising when you look at the stats:

What does all this data tell us? This is great news if you are an app developer working in the social app space. And next, all you need is an effective ASO strategy!

We'll next analyze the 25 highest-grossing social apps on the iOS store to tease out effective ASO insights, best practices, and forward-looking tips for attracting new potential users and increasing installs.

Solution: How to use ASO to promote the growth of a social app?

Before we dive into the essence of this analysis, App Store ideas for social apps, we need to talk about something more mundane but no less important: App Store Categories. 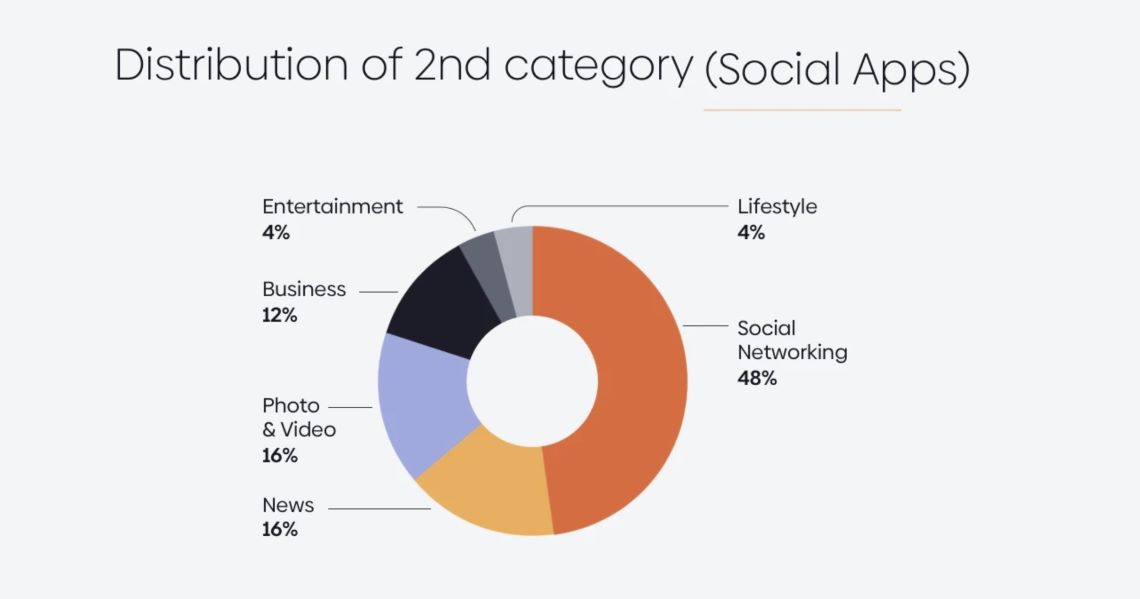 You might be surprised to learn that not all of the top-grossing social apps place themselves in the "Social Networks" category of the iOS Store. In fact, only 12 (48%) of the apps we analyzed identified themselves in this way. Other options include News, Business, and Photos and Videos.

Of the multiple apps we researched and put into case studies, only two had entirely unique categories. TikTok is in the "entertainment" category, while Pinterest is a good fit for "lifestyle."

The question is, why don't all these apps fall into the "social networking" category? Would anyone deny that Twitter, LinkedIn and Instagram are social apps? However, these networks are in the news, business, photo, and video categories, respectively.

Our belief is that developers place their apps in categories with ulterior motives in order to differentiate their products from the plethora of other apps that flood the iOS store.

Social networking is competitive. By placing your app in different categories, you can improve your ranking in the charts, drive more organic traffic to your App Store page, and generate more installs, users, and revenue.

Need to pay attention to:

Now that we've covered categories, we can talk about app icons - the vastly underrated element of your ASO strategy. Why? Because your icon is the most visible app store idea you'll ever have. It's everywhere, from search results to category charts to Facebook ad campaigns.

Our research shows that optimized icons can increase conversion rates by up to 30%! The first thing we noticed about these icons was that 96% of them displayed some kind of logo. The only social app to buck the trend is Clubhouse, which uses a black-and-white photo of a woman instead of a pretty, easily recognizable logo.

Regarding Clubhouse's icon design, our understanding is that developers want to differentiate their apps from their competitors. Clubhouse launched in March 2020, which means it's still in its infancy compared to industry giants like Facebook, Instagram, and YouTube. By using real images instead of logos, Clubhouse may be trying to tell users that he's different!

It's always fun to analyze icon colors. When we researched multiple apps for the head, we found one thing in common, striking shades, with colors that tended to spread across the map. Looking at some of the app icons at the top of the social apps category, 28% use blue as the primary color, while 20% use red, 20% use black, and 12% use purple.

With the exception of Clubhouse, the top apps in the social category are nearly every app that uses bright and/or contrasting colors in their logos to grab attention.

The Apple App Store allows developers to display app titles and subtitles next to icons in the first impressions screen.

After analyzing the titles and subtitles of the top paying social apps, we found that 36% use their app titles to better explain their work. This is a good strategy if your app name is ambiguous.

When it came to subtitles, we were surprised to find that 20% of the social apps we analyzed did not use subtitles. This seems like a missed opportunity.

Most apps in this category use their subtitles to do one of two things: describe what their app does, or explain the benefits of using their app.

For example, Houseparty's subtitle is "Hangouts," which perfectly describes what the app does. The private messaging app Signal, on the other hand, is subtitled "Say hello to privacy," which describes the platform's key advantages.

Need to pay attention to:

According to some research data, users who watch App Store videos are 3 times more likely to download. And to do your video well, here are a few things to keep in mind:

App screenshots are really important! Get them right and you can increase your CVR by 28%. Get it wrong and your CVR could take a 15-25% hit!

After analyzing how the top-grossing social apps use screenshots, a few things stand out:

If we remove Clubhouse from the analysis (for the reasons above), we see that the number of screenshots used is between 3 and 8. It should be noted, however, that 48% of apps use exactly five screenshots. That 48% includes industry giants like Facebook and YouTube. Remember that users don't waste time scrolling through your gallery until the end.

Portrait vs. Landscape mode: When it comes to screenshot orientation, portrait mode is the clear winner. Every social app we analyzed exclusively uses portrait mode screenshots. This tells us that there is no reason to fantasize. If your app is used in portrait mode, make sure your screenshots match this.

So what kind of screenshots do the top-grossing social apps use? By far the most popular screenshots in this category show snippets from within the app and use subtitles to better explain what the user is looking at. But we should mention that subtitles are optional. They are not used by Facebook, Instagram, MeWe and Clubhouse. As a general rule, if you can communicate the features and benefits of your app without subtitles, feel free to drop them. If not, there is nothing wrong with the extra text.

We noticed two other things about the screenshots used by the top-grossing social apps. First, when there are subtitles, a bright, eye-catching color is usually chosen as the background. Second, panorama screenshots are used, but they are not popular in analyzed applications. If you're not familiar with the term, a panorama screenshot is an artistic image that spans two or more images in the iOS store. They encourage users to see more screenshots in the gallery.

To ensure your screenshots are fully optimized, focus on:

An effective and detailed ASO strategy will help new social apps gain a place in the app store category. As mentioned above, we focus on on-metadata optimization, based on our thousands of successful cases, to optimize your app from every detail, with off-metadata optimization (app installs, app reviews and ratings optimization, or simply choose our guaranteed keyword ranking service), will reward you an amazing results.