Promote Your Game or App with Squid Game Effect In the first 23 days of the show's release, more than 132 million people watched it and 4.4 million new subscribers joined the platform. This is a new record for Netflix, surpassing Bridgerton's number one spot. Netflix is not the only company to benefit from this Korean battle royale show. The world is flooded with mods, Halloween costumes and merchandise based on the show. The mobile game market hasn't escaped - hundreds of hyper casual games have hit the app stores, all inspired by the show.

According to Game Refinery and Sensor Tower, downloads of the mobile game Brawl Stars have soared thanks to a viral video sponsored by MrBeast that recreates Netflix's Squid Games show. In the U.S., downloads are up 4.5x per week. It was YouTuber MrBeast who jumped on the bandwagon behind the success of the Netflix show and used the real version of the series (minus any bloodshed) to capitalize on it. 456 players, sponsored by Supercell, participated in the tournament and won $456,000.

In the following week, Brawl Stars' YouTube videos were viewed and downloaded more than 100 million times, up 41% to 1.4 million. It has now garnered 1.7 million plays.

Installs were driven primarily by the U.S., with downloads up 350 percent. Player spending is also up 54% to $8.2 million. Brawl Stars now has approximately 324 million downloads, with Russia being the largest region in terms of installs (12% of the total), followed by Brazil and Turkey. The United States ranks fourth.

To date, the game has generated $1.4 billion in lifetime player spending. The U.S. topped the list in terms of revenue, generating $209.7 million in player spending, or about 15 percent of the total. South Korea ranked second in revenue, while Germany rounded out the top three.

If you haven't had a chance to see the show yet, participants will need to pass six rounds (games). All of them are based on Korean children's games. There is tug of war, candy carving and different dice games (plus the now famous red light and green light). And because of the nature of hyper casual games (which are developed quickly due to their simple gameplay and mechanics), each round can easily be turned into an hyper casual game.

The game that topped the global charts was Supercent's K-Games Challenge. in a similar fashion, it looks at all the rounds in Squid Game. It was launched on October 2 and hit the charts in Portugal and Brazil on October 4.

Only two and a half weeks after Squid Game was first released, it was the first "Squid Game" game to make it available worldwide. It was number one in almost every country on October 6. It is arguably the first game to really capitalize on and lead this trend.

It currently has a rating of 4.5 on the US App Store with 17,300 reviews. Similar to the previous title we discussed, it stayed at the top of the charts until October 18. It is now ranked #190 in Games and #60 in Simulations.

Then we have Candy Challenge 3D created by Idil Morgul. the game was released on October 2 and did not hit the charts until October 7 (20 days after it aired). Unlike the first two games we discussed, this one focuses more on the second challenge of the show: cutting out a shape without destroying the honeycomb. It uses the keyword "Candy" in its name, and most of the images and descriptions revolve around this particular challenge.

It does support other challenges, but these are secondary to the core concept. Remarkably, it has been on the charts ever since and has repeatedly ranked #1 in multiple markets. Using our machine learning, we also gave the game a score of 32,000, beating the K-Games Challenge.

This may depend on the positioning of the game, using Squid Game's second candy game. But it has been the highest ranked game on the charts and has been in the top 10 for the longest period of time. It also has the highest rating, 4.58, with a total rating of over 37,000.

Who doesn't love the growth of social media? Adding Squid Game effects or any other popular show or movie to your social media strategy is an easy way to get your brand noticed. Social media offers the creative freedom to try anything. It's all about timing.

However, if social media works for you, there are a few things you need to keep in mind. For one thing, head over to TikTok, Instagram or Twitter - that's where the party starts. Roll up your sleeves and start researching what's working - and what's not. 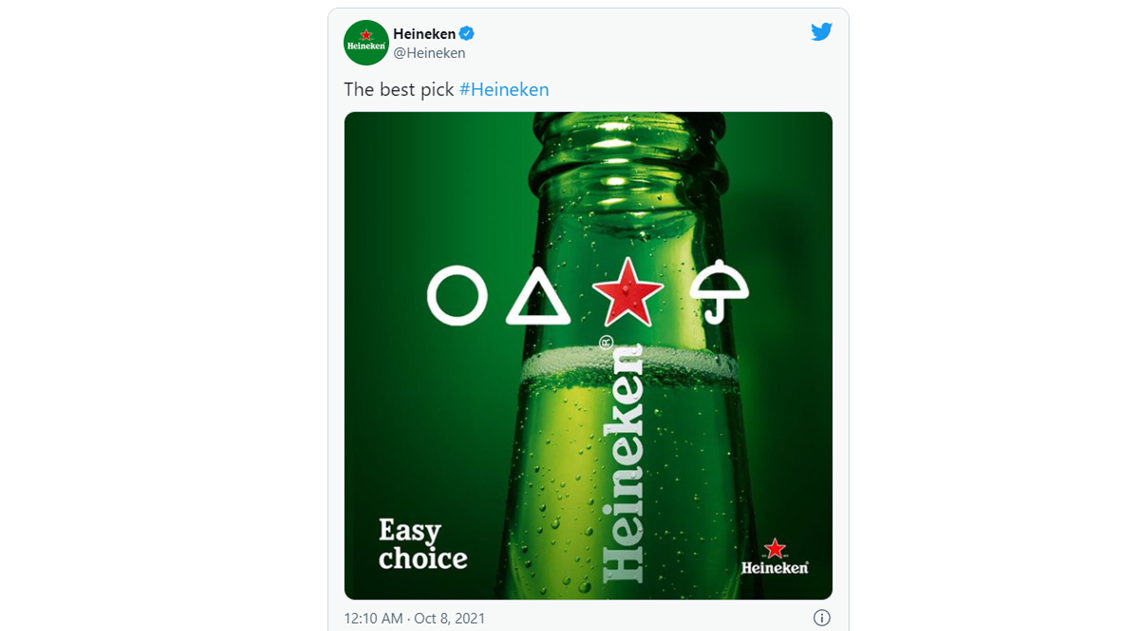 When you find the right campaign to resonate with your target audience, you can increase your chances of going viral by using the right hashtags, pop music and themes without having to pay for brand partnerships. So it's a great way to be associated with what's trending without spending your precious marketing budget. Social algorithms work wonders when it comes to trending content, and you can easily get your hands on that piece of the pie.

How can your brand capitalize on the squid game craze - or whatever will enter pop culture next? Implementing even just one of the following tips can help achieve success.

Since launch, 70% of the top games we've seen in the top 20 charts in the "Squid Game" genre have had the keyword "challenge" in them. For IP reasons (or so we think), these games can't use "Squid Games" in their titles (or at least shouldn't). But they all incorporate a part of the show into their descriptions and titles.

Even if the game isn't about Squid Game, we've seen games incorporate iconic masks into thumbnails and other elements in an attempt to quickly catch up with trends. supersonic Studios' Bazooka Boy was originally released in August 2020. Its icon used to be a yellow avatar holding a rocket launcher. In the latest update on October 15, they changed the icon to combine a "legally unique" squid game mask with an assault rifle. Reference to the guards in the show.

Their rankings have been pretty consistent. But since the switch, they have re-entered the charts, ranking 14th in India on October 6, but this is still a unique way to increase the game's traffic and popularity without having to make a major update to the game.

Some developers are following the trend of using the show's themes and featured games in their advertising strategies. For example, Brawl Star, mentioned above, has spiked its downloads by sponsoring YouTuber.

It is clear that some developers are piggybacking on the show's success in many different ways, particularly by optimizing their user acquisition campaigns.