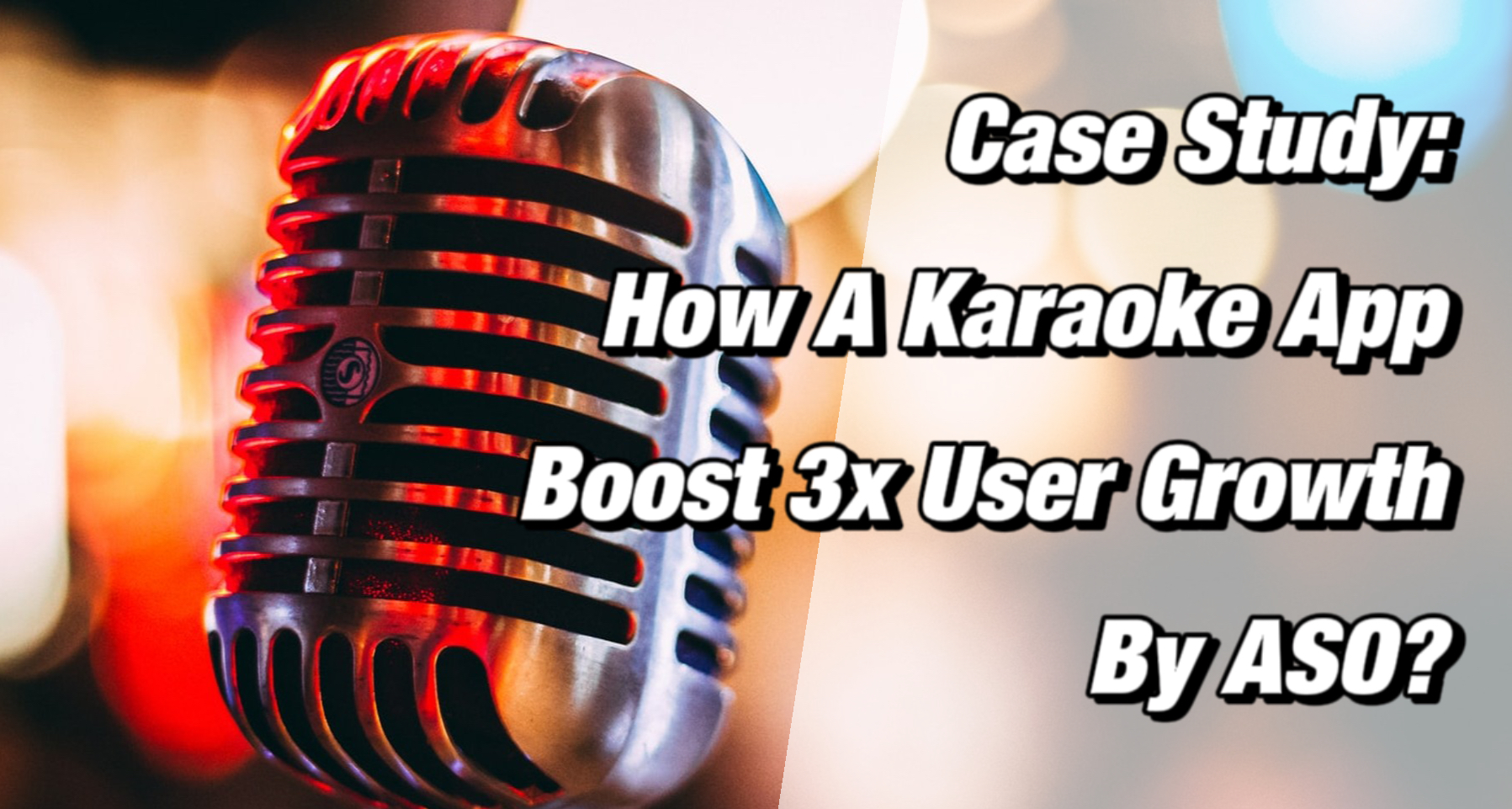 Online karaoke is no longer a new trend, today we are going to analyze one of our ASO cases for a well-known karaoke app, to see how we help them increase 3x user growth within 3 months. Maybe this case will inspire your app user growth strategy.

Our customer is a world-renowned online Karaok app that has topped the music download charts in 153 countries and regions around the world, with a cumulative download volume of nearly 450 million. In addition, as early as 2017, its annual revenue reached 130 million US dollars.

At present, in addition to being the most popular karaoke platform in the world, it has also gradually risen to become a promotion platform for musicians playing songs, album promotions, and tours. In the United States, the United Kingdom, Brazil, Indonesia, and other countries, the user praise rate is more than 80%.

This well-known app has a lot of competitors, so how does it increase search visibility and organic traffic in the app store? We first do some basic analysis of its keywords.

1. Smule has a strong brand, but its share of search traffic is not enough.

Since its release, the app has had a strong user base and brand influence, and it is destined that many users will directly search for the name of the app to download every day. The brand has high keyword searches and brings stable natural traffic.
However, we also noticed that different from other big brand apps, its branded keyword traffic share is only 46.67%. Why is this happening under the strong brand search volume? Let's move on to point 2 of the analysis.

In addition to brand keywords, it also ranks high in high search volume industry keywords such as "sing", "singing apps', "singing", and "karaoke", contributing nearly 40% of its additional traffic share.

We have to admit that getting these highly competitive industry keywords to rank first in app store search results is not easy. So, in what ways can we improve this probability?

What do we do in Keyword analysis?

In the App Store, searching for Smule, we can see that "sing", "singing', "Karaoke" and other core keywords appear in the title and subtitle positions. These are the two positions that can help keywords get high rankings. In addition, We also found that although Smule can only rank second in the keyword Karaoke, we made it appear first in the search results by placing Apple search ads (ASA). I have to say, this is another ASO and ASA collaboration case for optimizing user growth.

This is another harsh reality - keyword rankings are also closely related to app downloads. If your app downloads are (sustained) very low, sometimes you will find that even if your ASO keyword optimization has been done to the extreme, you still can't rank these general core keywords in the top three, let alone number one.

After increasing the download volume, the ranking of many keywords usually rises gradually and can cover more keywords. Our team provides efficient guaranteed app ranking service to make sure that your app searching positions in #Top 1-5. Meanwhile, we have app Package(Direct) Installs to make your app installs amount look better and more popular.

Combining the above, we not only use the correct strategy for ASO keyword optimization but also use Apple search advertising in conjunction with the continuous high download volume. These are all favorable factors that help it stand out in the fierce industry keyword ranking competition.

What do we do in Screenshot and video analysis

Like many of the big brands' videos we've seen so far, we have made a carefully curated video for our customers. The video is fast-paced and creates a lighthearted and fun atmosphere. The well-known singers on display can get people excited, but the ordinary people mixed in to make the viewers feel "grounded". Of course, the video also highlights what the Smule app is really about - singing together.

2. Screenshot: Show the point of interest to the user

This set of screenshots we made shows the points of interest for users, including "massive music library", "single solo or singing with friends", "singing with celebrities", "recording" and so on. Additionally, we add a short text description for each feature.
Since this app has more core functions, it is difficult to guess which functions users are more interested in. Therefore, we also conduct A/B tests on the sorting of application screenshots through Google Play's A/B testing and App Store Product Page Optimization. Find out the features that users in different regions are most interested in and put the corresponding screenshots in the front.

Remember, ASO is not just about keyword optimization and screenshots, it’s about optimizing everything. You need to improve the user journey from accessing the product page to successful app installs. If you have games, you also need to pay attention to your game's APK/IPA size to increase download rates.

* Grow with our app growth solutions - choose guaranteed app ranking service for TOP 5 app ranking acquirement, and maximize your app traffic. Or click the "Promote Now" above (for keyword installs for app visibility.)

While the downloads of this app have been fairly steady (and high) for a long time, in April last year, most games and social apps experienced a moderate dip in downloads after their download peaks. But new opportunities arise. 2 months after the beginning of our ASO work, the downloads surge and increase 3x user growth within 3 months.

ASO is a good strategy for both old and new applications. Some apps could take advantage of it more, but for many, it's a great strategy to attract the most target users. Even if you stop actively doing ASO, you can still benefit from organic downloads that can last for months or years. This is a big advantage over paid campaigns.

Finally, if you think this article is helpful to you, please forward it to your friends.