Home Blog App Marketing Android vs iOS: Which Platform to Build Your App for First?

Android vs iOS: Which Platform to Build Your App for First?

When choosing between Android or iOS development, software engineers are often puzzled. Both systems, despite having architectural similarities, still have different development and maintenance approaches.

Many appreneur success stories have risen from focusing on one platform at the starting gate. Most startups typically jump the gun when they want to make some noise and usually go iOS first, Android second.

However, certain circumstances may make it wiser to develop for Android first, or in some cases both platforms at the same time. The factors listed below will shed some light on the reasons.

Two systems are different from one another not just on the development level but even in terms of design and marketing strategy.

In this post, we'll cover the differences between iOS and Android. We will thoroughly evaluate the risks of choosing either OS and calculate the price of a sample app. By the end of the post, you will know if iOS or Android is a better fit your project.

The rapid increase of the smartphone users

With about 5.11 billion mobile phone users in 2020 in the world, app development is at its peak. The average person spends about 2 hours and 51 minutes on their phone every single day. It is expected that mobile phone users will increase to 7.33 billion by 2023.

Those statistics are undeniable, and app development is trying to keep up with demand. Software companies are trying to figure out the best approach to mobile development.

For the past couple of years, Android vs iOS development has been dominating the operating system market. The Android platform holds 68% of the market share, while iOS holds about 29.92% while the rest are smaller operating systems.

Although globally, Android holds almost 2.3x more of the market than iOS, it's noteworthy to mention the United States of America where the market share is roughly equal.

The easiest thing for a company to do with this knowledge would be to dedicate all resources to Android development. But the percentage of the market share isn't the only thing that matters. The iOS is dominating in more developed countries, which means more potential profit for companies.

There are quite a few elements to consider when choosing between iOS, Android, or both. 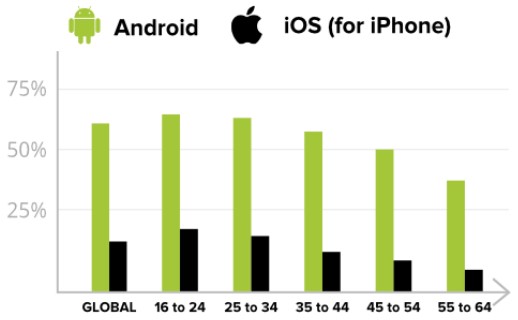 The biggest dissimilarities between Android development vs iOS development are the technical ones. Platforms have different programming languages, testing approaches, and so on. The most common differences in iOS and Android app development on the technical side go as follows:

iOS vs Android programming use different technology stacks. The first one has the Swift proprietary language designed for app development while the second one heavily relies on Java or Kotlin as an alternative.

Which stack is faster and easier to master? Most mobile app developers find an iOS app is easier to create than the Android one. Coding in Swift requires less time than getting around Java since this language has high readability.

Another major difference between iOS and Android development lies in the integrated environment.

iOS developers, on the other hand, rely on the proprietary XCode tool. The Apple-backed solution provides a variety of bug fixing tools, supports the entire range of iOS devices, and is easy to get around.

When iOS is the best choice

Generally, at the starting gate, it makes more sense to choose iOS. It remains significantly easier to write quality iOS apps than Android apps. Statistics show that iOS users spend 26 more minutes on their devices when compared to Android users as well as consume more data and spend more on mobile commerce

When Android is the best choice

If your target audience is Android, then launching on that platform is the obvious choice. This translates to an audience more concentrated in developing nations or certain segments of urban areas. 80% of the global market share is quite appealing if you’re trying to be heard across borders.

When both platforms are the way to go

If you want to charge into the market at full force, both platforms are the way to go. You're going in guns blazing, confident in your app's success. Well-established companies are generally the ones that will take this leap. They have the capital to dish out more freely so it would make sense and in turn, be beneficial.

It’s also possible that an app will cause commotion on one platform but fail to get noticed on the other. So if you can scrape up the capital, go for it. Wider availability in the market increases your chances of success. The more individuals that have access to the app, the more downloads it will get.

Android has the largest global platform share pocketing 80% of the global smartphone market share, with its presence towering in lower-income areas and developing nations. On the other hand, iOS users are deemed more valuable.

From in-app purchases to online retail to ads iOS users are known to historically convert at higher rates and have a higher average spend. And, in the U.S., Apple smartphones still hold a comfortable 42% market share. Looking solely at demographics, the Android platform seems like the obvious choice, but when you take in other factors that may not necessarily be the case.

Android typically has a greater number of ad-supported apps; on the other hand, paying for apps is still more common on the iOS platform (chart below). As a rule of thumb, iOS users are generally more valuable even when taking Android's market share into account.

On average, Android apps take 2-3 times longer to build than iOS. This is primarily due to the operating system release cycles and Android fragmentation. However, the Android fragmentation problem has slowly been dying down. As of May 2016, 75.6% of Android users are on Android 4.4 or higher.

Release and approval times also hold significant weight. The biggest problem for app developers is to get their app approved on the iOS App store.

The Apple review process can take several days. Sometimes apps are rejected for the slightest errors which can prove to be very frustrating for the developer who knows exactly how they want the app to perform. The app submission process for the Google Play store is much less tedious than the iOS app store.

Unlike its iOS counterpart and Andriod app will usually get published within several hours. The app developer also enjoys more freedom as concerns the general editorial content of their apps.

App updates on the iOS app store are also limited to 3-4 times a month while in theory, an app on the Android platform can be updated at any time, an unlimited amount of times.

With things like Interface Builder built into Xcode, iOS tends to be much more UI/UX friendly than Android. Due to the ease of working with the frameworks on iOS, developers can further immerse themselves in the process of making their users' experience a great one.

If a wider range of possibilities pertaining to customization in building and design is important to you then Android is the way to go.

Though it should be kept in mind that all this freedom results in being much more time-intensive. Also, the end-user doesn't typically care about how cool the back end is, they just care about if it works, favorably in a simple and intuitive manner.

Although it should be mentioned that at the 2014 Google I/O Developer Conference, Material Design was introduced, Google's design guideline to create simpler, better-designed apps for Android platforms. So Android is on track to create a more friendly building platform but is not quite there yet.

Building an app for Android or iOS depends on your audience 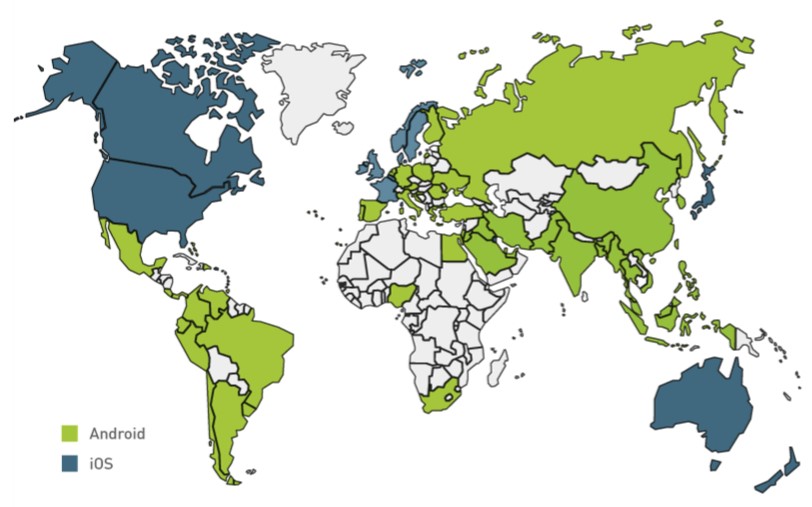 There are key differences in the users Android and iOS attract.

For example, Android devices have the greatest global market share. However, Apple dominates the App Store for customer spending.

Consider your target audience’s geographic and demographic characteristics when deciding which platform to develop for first.

If you're targeting a broad global audience, Android may be your best bet.

If your audience is in Western Europe or North America, or if you’re an e-commerce or enterprise app, Apple may be a better choice.