Home Blog App Promotion Strategy Among Us Game Spotlight: Some Great Points You Need to Know about Strategy Game

Among Us Game Spotlight: Some Great Points You Need to Know about Strategy Game After two years of silence, Among Us was pushed by players on the hot lists of various app stores and became the most downloaded mobile game ranking in the game category in end of August 2020. You can join ASO World team together to discover the great points about Among Us and find the answer of why the Among Us on fire. For game developers, proven effective factors can help you find more development inspiration.

What is Among Us online game?

Among Us online game - Play online or over local WiFi with 4-10 players as you attempt to prep your spaceship for departure, but beware as one will be an impostor bent on killing everyone! Crew mates can win by completing all tasks or discovering and voting the impostor off the ship. The Impostor can use sabotage to cause chaos, making for easier kills and better alibis.

In one short description sentences is:

Among Us Game is an online and local party game that allows 4-10 players to have an adventurous and exciting experience in teamwork and betrayal!

The most downloaded mobile games in Dec. 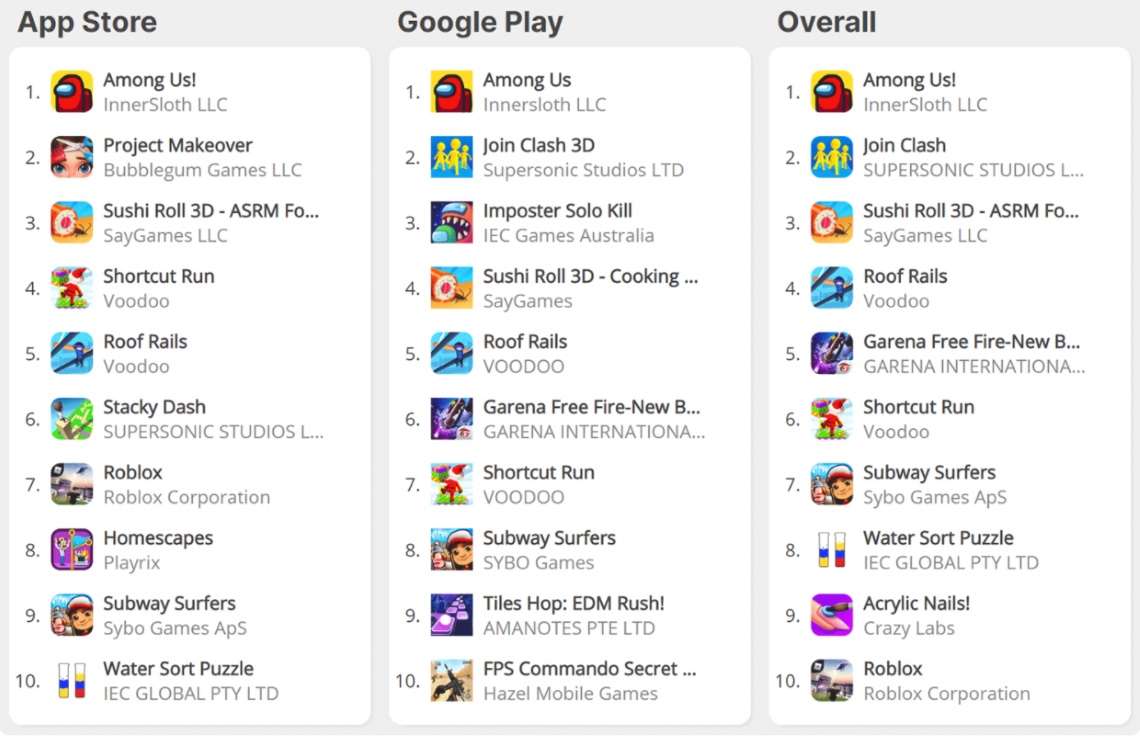 According to our statistics on the number of downloads of all mobile games in the game category of Google and Apple's two major application markets for the entire month of December 2020, Among Us has consistently ranked first in downloads. The survey also shows that the games in this ranking have been downloaded 240 million times worldwide. 18% of these downloads (approximately 42 million) came from the iOS App Store, and the rest came from Google Play on Android.

When we investigated the "app store" opportunities and search trends in the Google keyword analysis tool, Among Us's topics and hot search keywords also told us the direction of interest of our players.

Among Us ranking data

In September 2020, "Among Us" had 60 million daily active players, most of whom played on iOS and Android. InnerSloth announced the sequel in August 2020, but due to the influx of new users, it chose to cancel the sequel and is committed to importing certain features and solving problems in the original features.

We have collected data and statistics from "Among Us", please read the following for more information.


What you need to know:

According to a new report from analytics firm AppFigures reveals that Among Us was the most downloaded app on both Apple's App Store and Google's Play Store in December of 2020. And the game experienced 48 million new downloads in iOS in the month, which is even more insane once you realize it's the lowest download month yet since the game went viral in August of 2020.

Great Points You Need to Know about “Among Us”, the best strategy game.

A very important factor in the success of the Among Us game is that this game meets the two needs of many players for "local gatherings" and "teamwork", from the popularity of this game around the world and the ranking of strategic games in the app store Weight tendency, it is not difficult to see the player's group status and preferences. Especially in the United States, in the ecological environment where the new crown virus is spreading, the popularity of similar strategic games and teleconferencing office applications has surged and maintained a continuous trend.

When we analyze the most attractive features of the Among Us game, the keyword "Among Us Character" that is popular among players cannot be ignored. From Google Trends (site: https://trends.google.com/), we can see the fragmented demand keywords frequently searched by players.

There are 3 different character for playing the game:

1) being the "host" device for other local network players;
2) playing online with others;
3) using a private invite code from "Host" to join them. 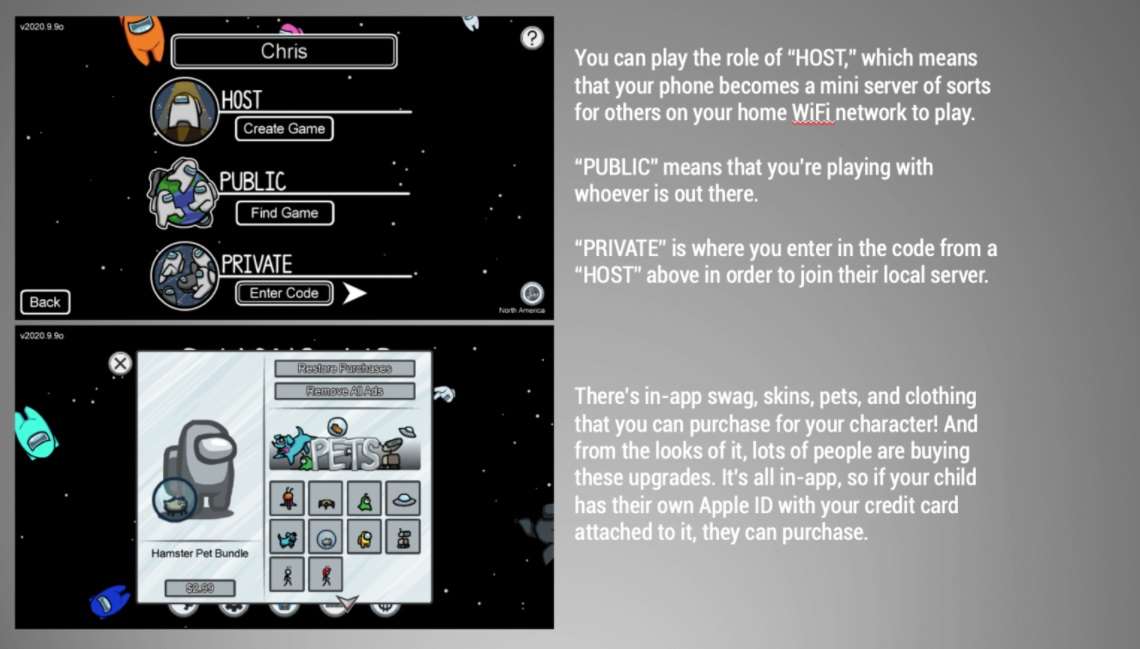 Among Us vocabulary that you should know:

Crewmate – a player.
Imposter – you’ve been tagged as one of the “killing” crewmates who tries to kill the others without being suspected.
SUS – “suspicious,” or maybe one of the imposters.
Vent/vented – we use it as a noun, but in Among Us, it’s a verb. “He vented.” A move often used by imposters, trying to move from room to room to take out crewmates.
AFK – “away from keyboard,” which is more common in the PC version.

Among Us allows players to connect with other players from anywhere. The game also has in-game chatting, which you can see in the image below. 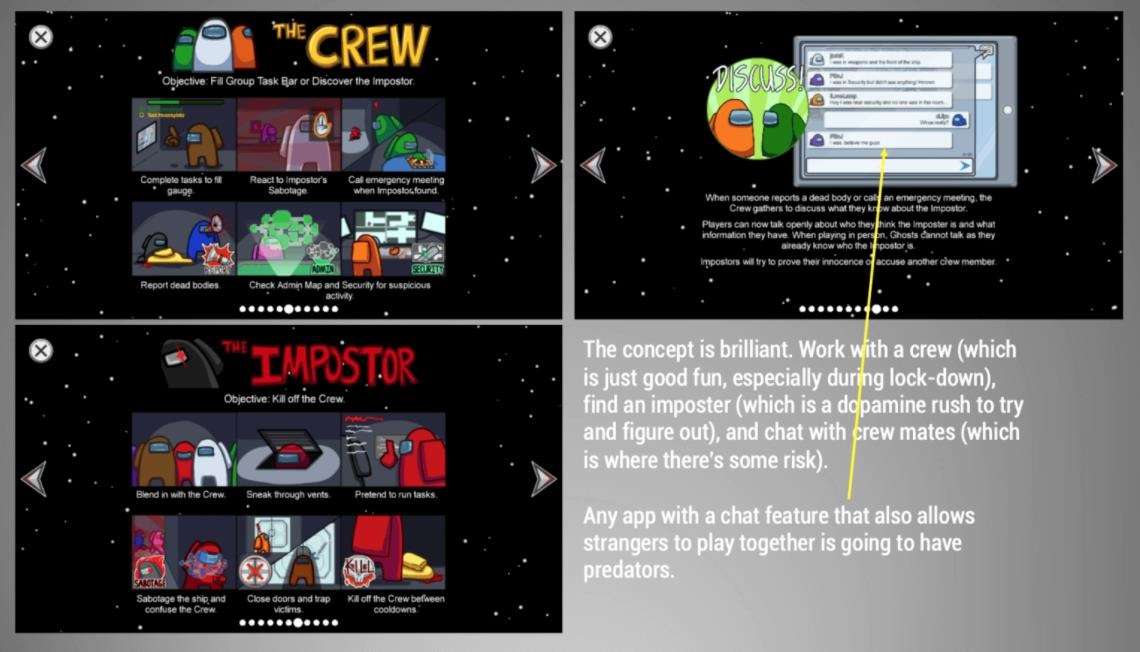 During the game process and character composition, players can experience various exciting activities through role-playing, and they can also improve their "teamwork" ability. This may be the attraction of similar strategy games.

Among Us in-app purchase

Among Us has in-app purchases for swag and upgrading to remove ads. Many wonderful experiences can be achieved by purchasing equipment. What Among Us brings to players is a space full of creativity and imagination. In this regard, it also caters to the curious needs of most gamers. The rich returns brought by in-app purchases also give developers and operators the driving force for continuous innovation.

From the search intention analysis data, many players are searching for the "free" version of Among Us. 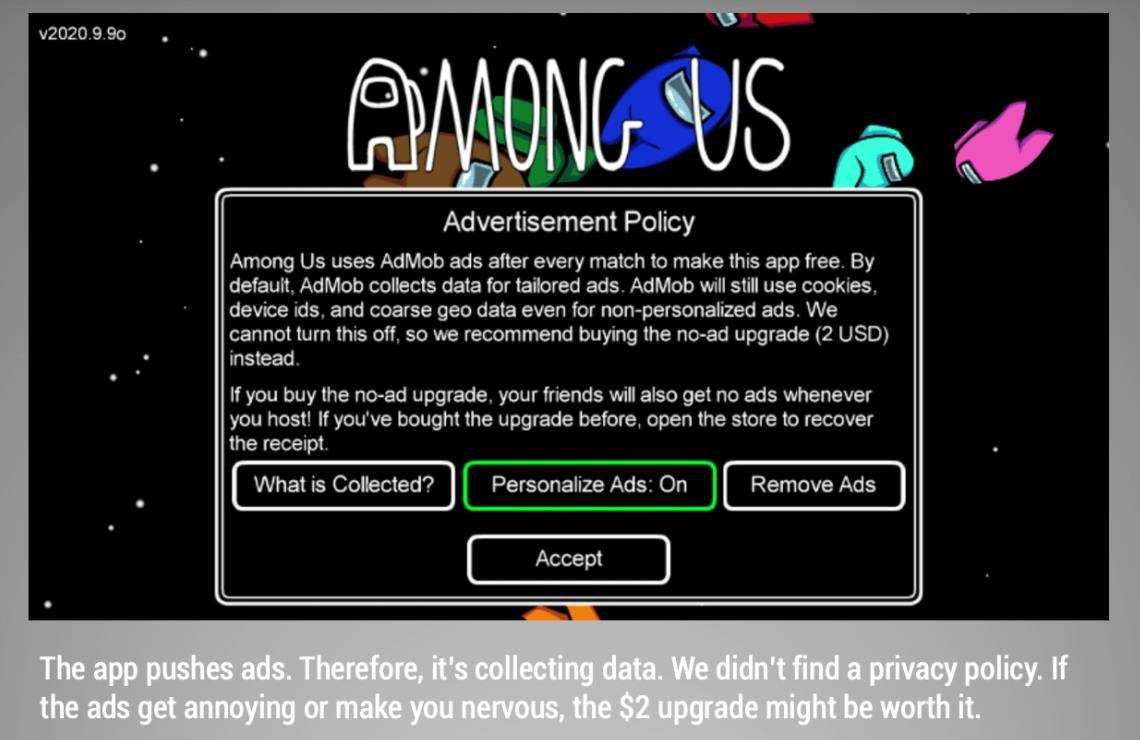 From the image, we can see that Among Us can meet the needs of different user groups by choosing free but need to accept advertisements or pay to avoid advertisement interference to complete the user stratification. The profit model of "app fees + advertising revenue" has also provided many game operation teams with more new creative ideas.

ASO Guide: How To Design Your Screenshots And Make Full Use Of It? 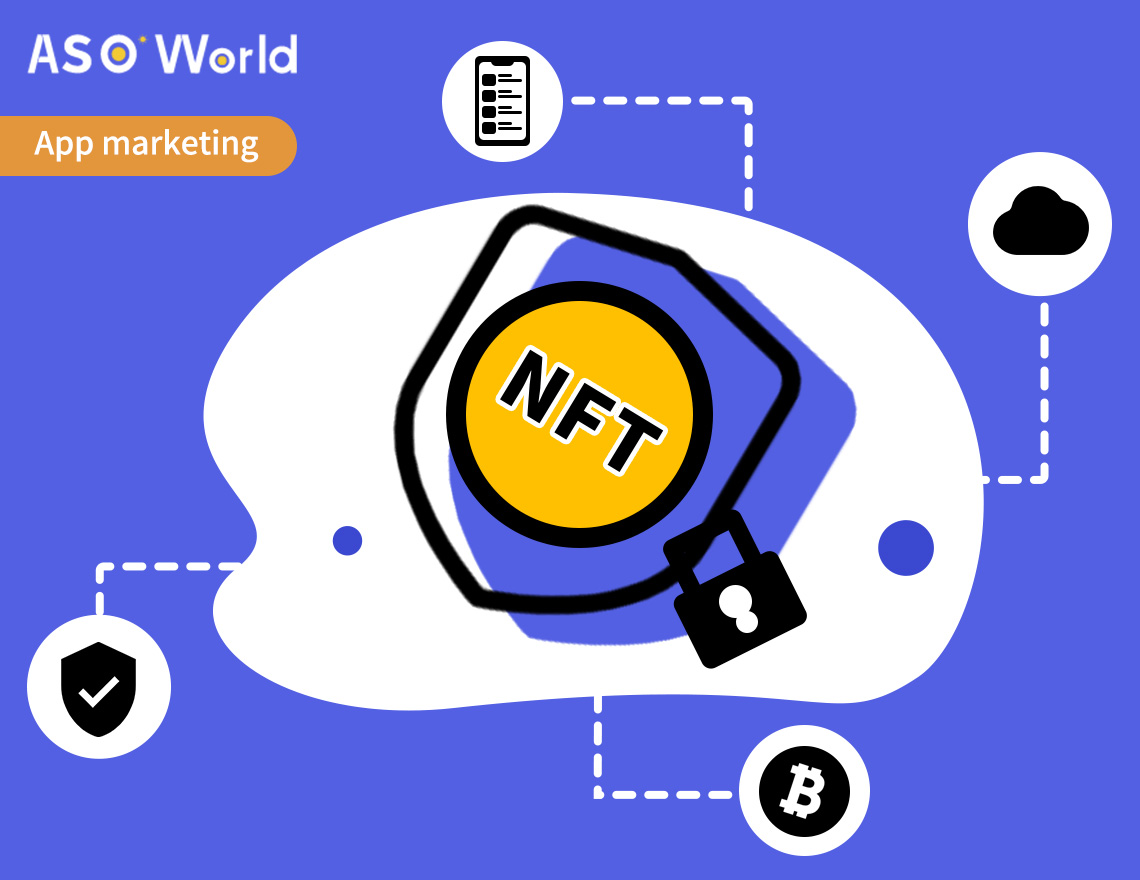 Complete NFT App Marketing Guide: How To Make Your App Stand Out?