What is App Store Optimization(ASO)?

App Store Optimization (ASO) is the process of optimizing mobile apps basic metadata to improve the App visibility in App Store. About 65% people will download app through search keywords. Optimize the app with ASO skills to acquire more and more organic users.

What is Keyword Installs?

Keyword Installs is the progress that App is found, downloaded and installed by people searching keywords on app store.

Keyword installs has been confirmed to safely and effectively improve the ranking of the app’s keyword search results in the app store.

For example, if 100+ people to find your app and reached your page, to download and install your app by searching a certain keyword daily, and keep this traffic for several days, then you will find that your app ranked top to the app store charts.

About 65% of visits find and download their apps by searching keywords on the App Store.

1.What is Package Installs?

Package Installs is the progress that people download the app by app install package name, or the App ID, or the full url of your app on the Google Play Store(or App ID in iOS App Store).

The more installs your app has, the higher it will rank and, consequently, it has a higher chance of getting to top charts.

On-Metadata Optimization is refers to the basic metadata optimization on App Store. The ranking algorithm will check the basic information about the apps, and to process information such as your industry and keyword relevance to determine the category ranking of your application in each category.

How to Help Your App Rank: The Basics of ASO

The keyword placed in the title should be the one with the heaviest search traffic. Spend time researching which keyword that is, because changing your title too often can be detrimental. As your app begins to rank higher and gain more reviews, your app’s news will begin to spread by word of mouth. Changing the title can make it difficult for word to spread about your app.

You’re given a subtitle below the title in search results. This is also limited to 50 characters in Google Play Store, and 30 characters in iOS App Store. It gives you another chance to use more descriptive keywords.

3)Keywords(Just in iOS, no in Google Play Store):

To improve your search rankings, you need to know which keywords are relevant and used most often by your target audience. It is helpful to monitor competitors to realize how you compare week to week.

There’s no room for fluff, and you may need to A/B test several iterations to find what works best.

Off-metadata optimization is includes the “Total Number of Downloads” and the “Ratings and Reviews”.

The “Main ASO Metadata” with the Off-metadata as “Total Number of Downloads” and “Ratings & Reviews” together have the largest impact on where your app ranks, so pay special attention to these factors.

The way to find the useful keywords for your app you can read the article: http://bit.ly/2PALTEW

In the process of choosing right keywords, there are plenty of tools you can use to find out which word has a higher traffic and have them compared to decide which word can be used as your keyword. You’d better optimize your app title and subtitle firstly to make the most out of app store ranking algorithm.

Stage 1, for the new marketer or new promoter, start your New App promotion.

Most apps basically have no keyword coverage and foundation when they are first launched at the beginning, so the main problem they face is that the natural traffic is all relatively low. Such a problem will not only happen to the newly launched app, but also some apps that have been launched for a period of time will face the situation of less traffic and ranking.

In this case, customers can optimize the operation on the number of keywords coverage, focus on digging long-tail words, as much as possible to get traffic, so as to achieve the purpose of improving app ranking; if the app also has good traffic in the early stage, you can focus on the basis of coverage optimization, focusing on industry keywords, competing keywords, and so on.

At the stage of less natural increment, it is difficult to compete with the mature platform in the industry big words. Therefore, at the initial stage of optimization, the app's focus can be shifted to mining long-tail words.

Note: Try to prepare your reviews contents more detailed, to includes your keywords. Then you may find that your keyword coverage be improved, and you may also have the chance to be listed as featured content by the app store.

After this step, some people can find your app by searching several low competition keywords. Your app normally rank to top with these keywords searching.

App Condition on App Store: App already have finished the basic optimization, and get some users to download and do the review for their app, app can be searched by some keywords.

There are some apps that have a certain amount of traffic in the initial stage, but nopopular keywords and related keywords coverage, these apps can focus on coverage optimization basis, focusing on industry words, competing words and other long-tail words.

But in such a situation where there are already a small number of keywords covered, but the traffic is still very low, and there is a lack of exposure in the application market, and have little chance of being find when users searching. In such a situation, the words with traffic are selected and maintained with focus.

Circulate this stage plan to add new medium competition keywords that your app covered, and continuously increase the chances of your app being displayed after being searched by different keywords. Your organic traffic and keyword coverage will continue to grow.

App Condition on App Store: App with some keyword coverage (which relevant keywords with highly competitive search terms be ranked well, and the popular industry keywords be ranked over 200, users will still difficult to find your app by popular keywords) .

There are some apps already have long-tail keywords, in the early stage with a certain amount of traffic, the basic conditions have been built to complete, that is, the focus on optimizing the keyword ranking, with the effect of volume, etc. has been more stable stage.

But the app's and popular keywords ranking is not very forward, this situation can be focused on the improvement of traffic and user acquisition, on the basis of popular keywords coverage optimization, focus on industry words, competitor words, and so on. 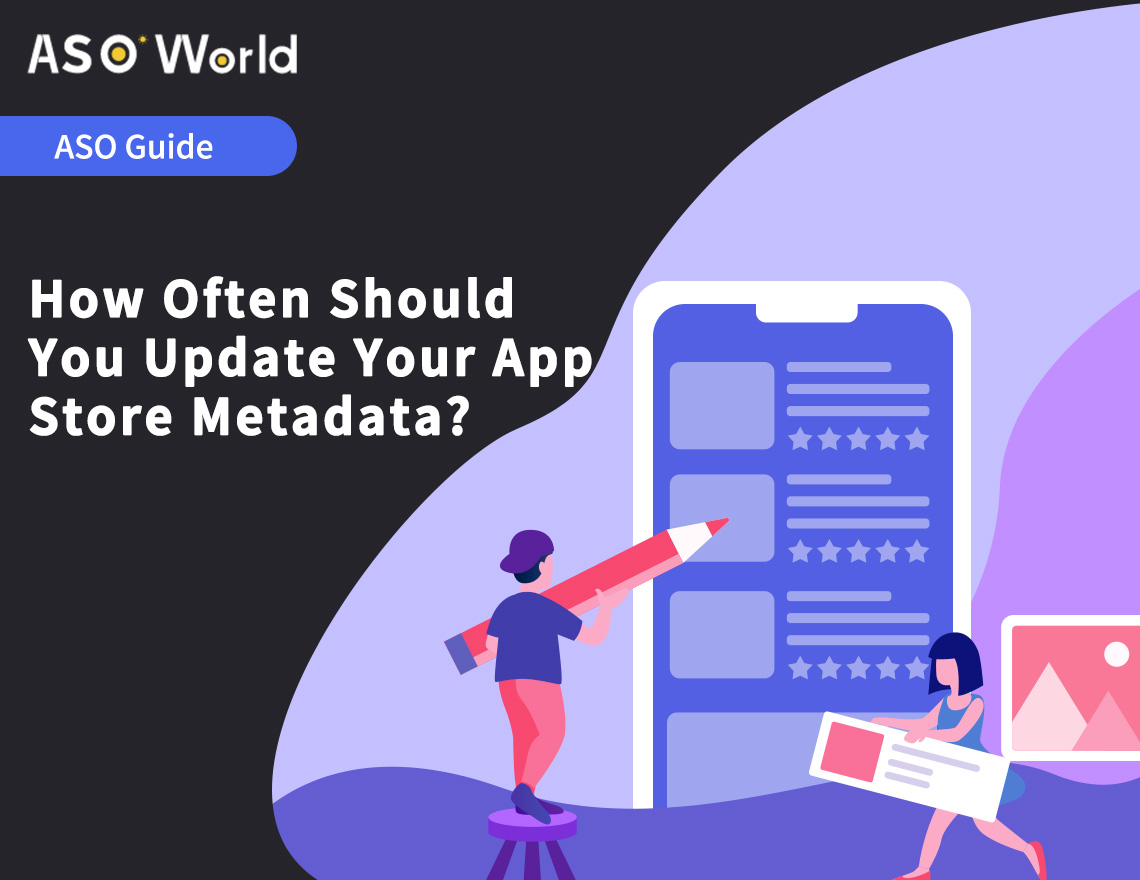 How Often Should You Update Your App Store Metadata? ASO Case Study: How To Grow Your Meditation App in 2023?